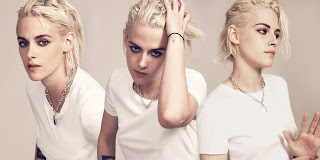 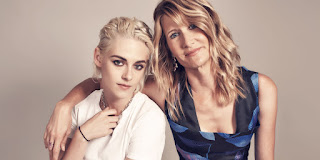 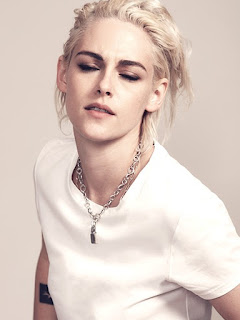 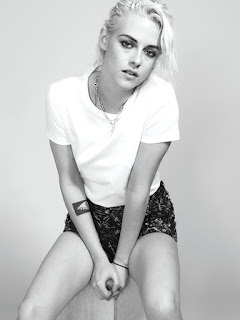 ELLE Magazine : “I fucking love your portion of the movie, by the way,” says Kristen Stewart, jaw-length hair freshly platinum, to Laura Dern, her costar in Certain Women. Even though both actresses star in Kelly Reichardt’s exquisite slice-of-life film, they don’t share any scenes. That’s why they’re only now—during their NYC press tour, with me as third wheel—getting the opportunity to exchange spirited praise. “Oh my God,” replies Dern, in emphatic kind. “I love yours.”

Neither is wrong. Based on a suite of short stories by Maile Meloy, Certain Women is a triptych, peeking through the seams at three characters as they attempt to stay afloat against the backdrop of pale Montana mountains. Beth (brought to weary life by Stewart) is a recent, unlikely law graduate who accidentally landed a shitty job. Then there’s Laura (played by Dern), a lawyer who gets caught up in one client’s desperate quest for justice. Laura is having an affair with Ryan (James Le Gros), whose brittle wife, Gina (Michelle Williams), is deeply invested in securing some local sandstone from an aging, hesitant man for the house they’re building.
The three women are connected only in the most tangential of ways, reflecting just how little we can sometimes grasp the contours of other people’s lives. Hence the whole ships-in-the-night thing for Dern and Stewart. But while the three storylines are totally distinct, there’s an emotional kinship among the trio. “The through line is that there are some women up against immovable objects that they can’t seem to dislodge,” explains Stewart, “and it’s kind of tiring to watch all three of them go up against that.”
Speaking of dislodging obstacles, Stewart’s electric performances in Certain Women and the forthcoming Personal Shopper—not to mention acclaimed films like Clouds of Sils Maria and Still Alice—are being lauded left and right, and the former Twilight star is currently facing some critics’ “realization” that she can actually act. (“Congratulations!” quips Dern.) “The thing is, I’ve worked so hard on every good and bad movie I’ve ever done,” says Stewart passionately. “And you can look at something and say that it’s not your thing, but nobody can say that I haven’t…like, I’ve just been gunning since I was like 10.”
Since both are veterans of the trade, what do they think about the recently passed California bill requiring entertainment sites like IMDb to remove actors’ ages if requested? “Thank God. It’s fantastic,” says Dern. “As a child of actor parents, I will just tell you, my mother’s age has been misprinted for many, many years, so she was always 12 years older in print than she actually is.” Wait, what? If even the legendary Diane Ladd can’t escape the tyranny of Hollywood ageism, what hope does anyone else have? “For years people were like, ‘Oh, I didn’t realize,'” Dern explains, “and suddenly the way they cast the person is…it’s just heartbreaking.”
After her revelation, Dern flips the question to Stewart, whose experience is a little different. “I’m fine because I don’t care, genuinely. It’s not like I don’t care what people think—I care what people think a lot,” Stewart says, “but some people think I look like shit and that’s fine.”
Equanimity is, it seems, a baseline requirement for not losing it among Hollywood’s messy yet exacting fray. When did the two actresses last decide they they gave zero fucks? “I am so grateful to be in my forties,” says Dern, “because that is the moment when, no matter what your friends or your family or social media—but most importantly the deep voices inside—are saying, you don’t give a fuck anymore and it’s great.” Apart from about her kids, of course. “When you become a parent you really care that you get that right, and you care about nothing else.”
Stewart hesitates before answering the question; it turns out it’s got complicated connotations for her. In the silence, Dern offers: “We don’t know each other, but my perception of you…the energy you put out is, This is who I am, and it’s a beautiful thing.” In response, Stewart says, “That’s really good to hear from you.” But she wants to clear something up: “I don’t like the idea of people thinking that I don’t give a fuck.” In fact, she gives a lot of fucks. “Nobody fucking understands or loves what they do more than me,” she says, “so it really kind of hurts. What I don’t give a fuck about is stuff that doesn’t matter. Don’t get it twisted, you know what I mean? Do not get that shit twisted.”
One other thing that Stewart does care about is the representation of same-sex relationships on screen. Her Certain Women character, Beth, unwittingly inspires an intense desire in one of her students, Jamie (newcomer Lily Gladstone, in a heart-crushing turn). “I think there [are] so many modern love stories that have not been told and I think it’s so exciting,”she says. “We are so standardized in terms of how we see people loving each other on screen…now we’re kind of acknowledging that we’re not all the same as everyone, that things are complicated and individual and unique and fluid.”
Recognizing the crucial importance of individuality is, ultimately, what drew both actresses to Certain Women, and to working with Reichardt, whom Dern calls “an incredible filmmaker.” “Often, actresses are asked to be emotional or harsh or sexualized,” says Dern, “or whatever this sort of idea of women is.” Our time is almost up, but Stewart is nodding along.“We’re asked to just be, and it’s rare that women get to do that.”
Danke an adoring-kstewart
Verfasst von Stewart & Pattinson Support um 18:48
Diesen Post per E-Mail versendenBlogThis!In Twitter freigebenIn Facebook freigebenAuf Pinterest teilen
Labels: Kristen - Interviews, Kristen - Outtakes / Images / Porträts, Movie - Certain Women
Neuerer Post Älterer Post Startseite