His Cannes entry, “Maps to the Stars,” returns in a way to territory Cronenberg explored in “Dead Ringers,” and it's probably the director's best film in at least a decade. Here, working with the talented literary satirist of Hollywood culture, Bruce Wagner, Cronenberg has hit his stride in a big way. He nails our celebrity-obsessed culture, and the sickness it breeds, right to the wall

Cusack is appropriately creepy as the father, and Williams is solid. To say any more about them is really to spoil things. Robert Pattinson has a small part, but gets a love scene, of course, to satisfy his fans. Pattinson and Cronenberg are developing a nice collaboration, however, and here's to hoping we get to see more from the two of them.


The director's also been gifted a cracking cast for the material. Before you ask: no, Robert Pattinson isn't in it all that much (his role could argue be lifted from the film without too much problem), but yes, he's pretty good in it. Plus you get to see him as a sort of glam-rock version of Khan from "Star Trek," so there's that. Olivia Williams' role is similarly underwritten, but she does find new texture to the kind of ice maiden that she's riffed on before.

But on the whole, the film is a sickly enjoyable wallow in the scandalous, fucked-up side of showbusiness, and a real return to form for the filmmaker. If nothing else, it'll rid you of any last desire to go on an actual LA star tour, and that alone is something to be thankful for.

My instant reaction, after stumbling, open-mouthed, from the cinema, was a pathological need to stumble back in again. There’s so much in this seething cauldron of a film, so many film-industry neuroses exposed and horrors nested within horrors, that one viewing is too much, and not nearly enough. Cronenberg has made a film that you want to unsee – and then see and unsee again. 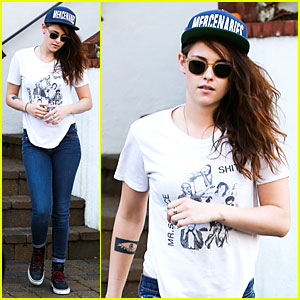 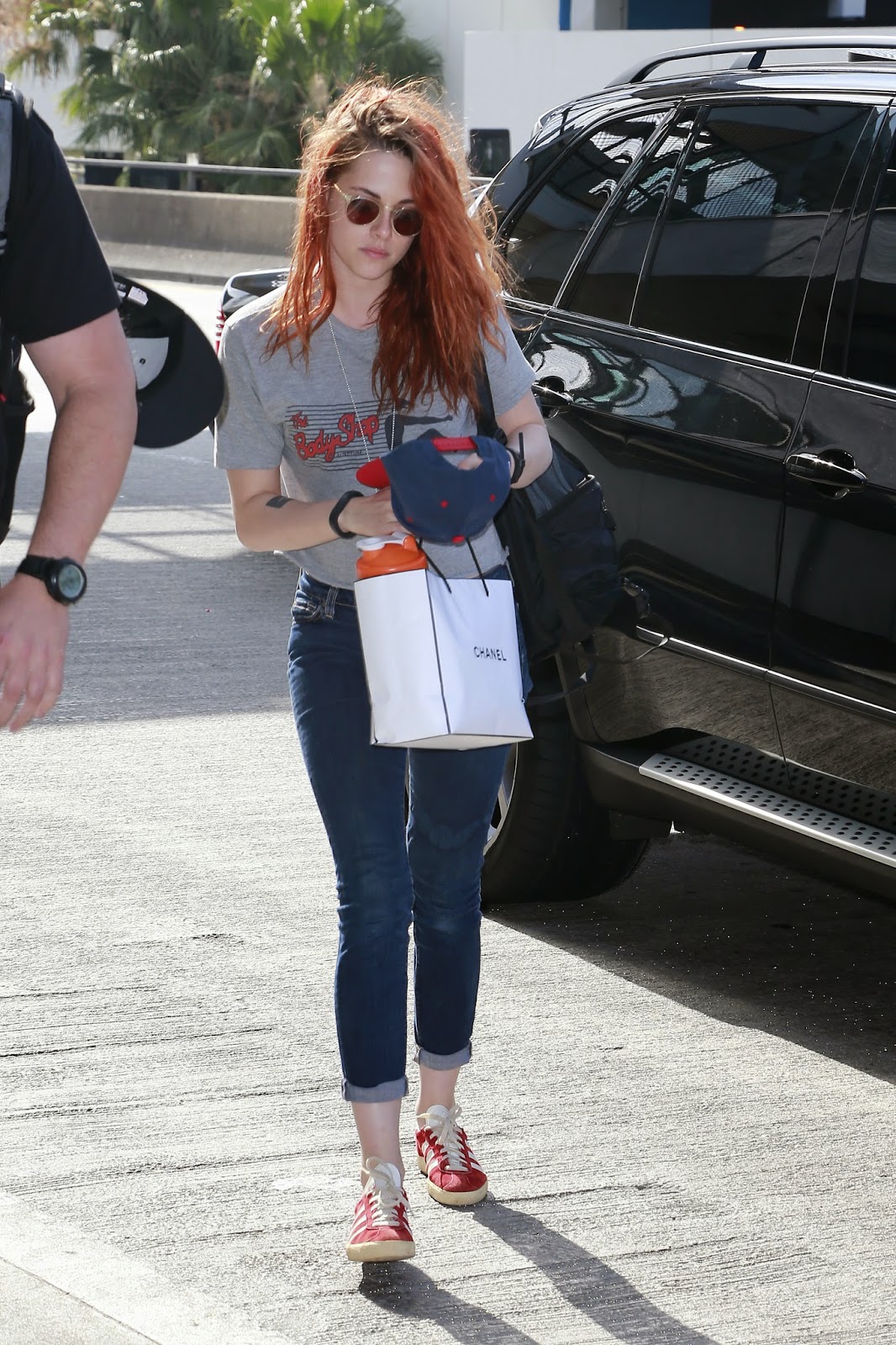 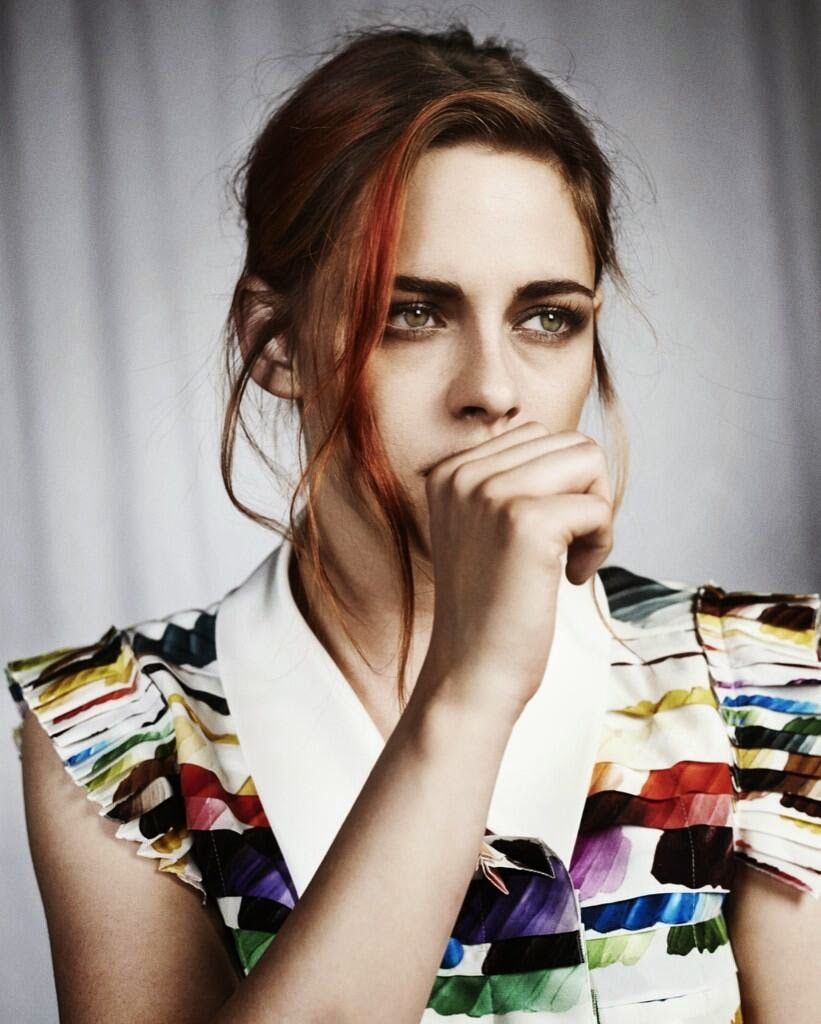 On April 21, 2012, Robert Pattinson slipped into a rented Toyota Camry and set out on the 10-minute drive from his home in L.A.'s Los Feliz to Koreatown. The actor was anxious; he was about to audition for a role he desperately wanted, and auditions are hardly his forte. "I hate auditioning," he says. "I just can't do it. I get so nervous, like cripplingly nervous. I'm bad at them, and I feel awful afterward." Nor were his nerves soothed by his recent forays into indie film. Such pictures as Bel Ami and Little Ashes had come and gone with more of a fizzle than a bang, and Cosmopolis would sputter out soon -- all mere squibs compared to the supernovaTwilight, which earned $3.3 billion at the box office and brought Pattinson $20 million for its final installment alone. He wanted this part -- needed it, even -- to prove he no longer was just a dark, brooding, iridescent, slightly humorless, 100-year-old vampire named Edward Cullen. So he arrived at his destination young, handsome, famous and worried as hell. "It was terrifying," he says. "It's kind of rare that I really, really want stuff." He shouldn't have stressed (though maybe that helped). "He came through with flying colors," saysDavid Michod, the Australian director of 2010's Animal Kingdom, who put the actor through his paces in a marathon three-hour meeting that included lengthy conversations, scene readings and improvisation, all to see if he could play a slow-witted gang member who sets out on a road trip withGuy Pearce across a dystopian Australia in search of the latter's stolen car. "He came the closest of any actor to walking into the room with a beautiful, fully realized version of the character that was not dissimilar to mine. It was exhilarating because I could suddenly see the movie."


The plot of director Olivier Assayas’ next pic is being kept under wraps, but it’s described as a sophisticated heist action-thriller.Robert De Niro has joined the cast of Idol’s Eye alongside Robert Pattinson. Benaroya Pictures has come aboard to finance the project, which is expected to start production in October in Chicago and Toronto. Charles Gillibert developed and produced Idol’s Eye with CG Cinema, Bluegrass Films’ Scott Stuber, Film 360’s Scott Lambert, Alexandra Milchan and Michael Benaroya. Ben Sachs is executive producing.

"The Rover" Weltpremiere am 12.Juni in Westwood, LA 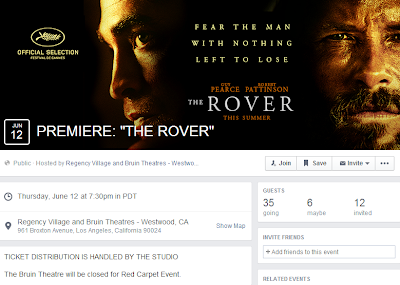 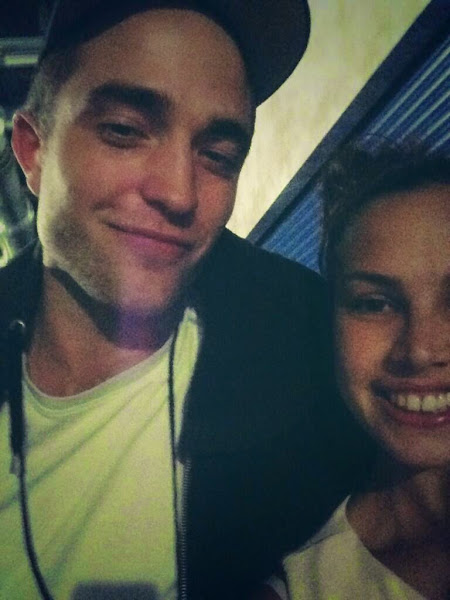 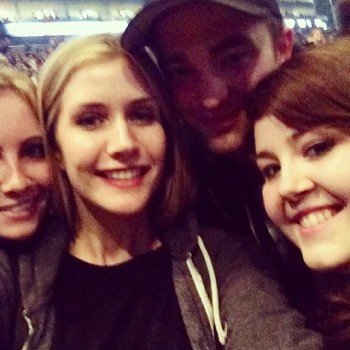 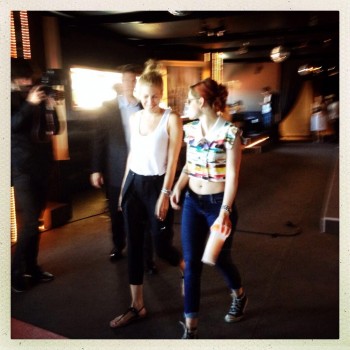 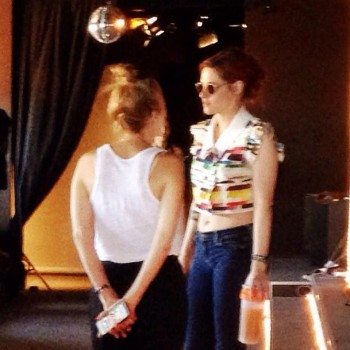 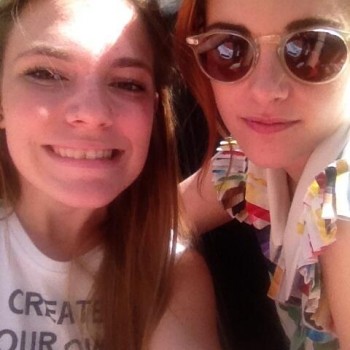 Kristen Stewart shines in her best role to date, in fearlessly intelligent drama Clouds of Sils Maria by Olivier Assayas, shown at Cannes 2014, says Robbie Collin
(...)
But it’s Stewart who really shines here. Valentine is probably her best role to date: she’s sharp and subtle, knowable and then suddenly distant, and a late, surprising twist is handled with a brilliant lightness of touch.

The relationship here is quite beautifully drawn, with Stewart again demonstrating what a terrific performer she can be away from the shadow of Twilight. She's sharp and limber; she's a match for Binoche. Sitting down for dinner, in one telling scene, Val dismisses her boss as a snob and claims that blockbuster fantasies can be just as valid, in their way, as social-realist dramas set in factories or on farms. Maria arches a delicate eyebrow. Yet again, she's unconvinced.

In Oliver Assayas’s Clouds of Sils Maria, Kristen Stewart sticks it to anyone who ever slammed her for Twilight.
(...)

It may be Chloe Grace Moretz's character, the outwardly bratty tabloid sensation Jo-Ann Ellis, who flips a middle finger at the camera, but it's the real Kristen Stewart, franchise-famous celebrity, who flips a middle finger at the critics in Clouds of Sils Maria. Olivier Assayas' thoughtful and intelligent meditation on acting, fame, and age doesn't just offer Ms. Stewart the best role of her life; it grants her a moment at center stage to lay out, in eloquent yet non-didactic terms, a defense of actors in the kinds of movies that sound a heck of a lot like Twilight.

While the meta moment fits snugly in the flow of this movie (and no doubt would work well with another talented actress delivering the lines) it's impossible not to imagine this as a K-Stew cri de coeur, a suggestion that those who have been slamming the Twilight films maybe should water down their haterade. Stewart gives a striking performance in Clouds. Her character Val, a personal assistant and rock of Gibraltar to Juliette Binoche's film and stage star Maria, is self-assured, crafty, honest, perceptive and even a little bit warm. It's a 180 from the dead-behind-the-eyes Bella Swan, yet there's the same flat delivery and crossed-arm presence. Here it radiates confidence, not Edward vs. Jacob indecision. Most of the film is just Stewart and Binoche in conversation, and Stewart more than holds her own. This film will fundamentally change your perception of this oft-mocked individual.

To help her through this metaphysically trying time is assistant, Valentine, here played by Kristen Stewart, who delivers a performance of immense poise and texture, retaining good humour in the face of a full-time position which involves being locked in the professional mindset of another woman. Her character, replete with forearm tattoos, vintage band t-shirts and thick black-framed glasses, is one who initially seems like a satirical archetype of the carefree PR dolly, yet Stewart imparts an air of pensive solemnity, seldom exploding into grand, try-hard theatrics.

The majority of the film’s two hours is devoted to scenes involving Binoche and Stewart, sometimes with others but mostly alone, so for anyone who enjoys watching these two excellent actresses knocking it back and forth as their characters cope with the myriad issues surrounding a performing career, there is much to behold. This is definitely an insider’s view, looking at things not in a salacious way but as a consideration of the way such lives are led and how past associations continue to impact decisions made in the present.

Binoche and Stewart seem so natural and life-like that it would be tempting to suggest that they are playing characters very close to themselves. But this would also be denigrating and condescending, as if to suggest that they’re not really acting at all. Their give-and-take and the timing of their exchanges, particularly in the rehearsal sequences, is wonderfully fluid and non-theatrical; Binoche works in a more animated register, which makes Stewart’s habitual low-keyed style, which can border on the monotone, function as effectively underplayed contrast.

Val, the hyper-reliable young woman who serves as her minder, mother, therapist and rehearsal partner. It is Val who talks her nervous boss into doing the “Maloja Snake” revival, dragging Marie to a studio-produced superhero movie just to see Jo-Ann Ellis, the edgy young actress (Moretz) tapped to play the other part.

Running lines from the play, Marie and Val may as well be describing their own sexually charged codependency, so perversely does the dialogue fit the pair’s own increasingly unhealthy dynamic. At times, Val excuses herself to visit a photographer boyfriend (although a weird mountain-driving montage suggests she may simply need to get away when the connection becomes too intense), until finally, Val seems to disappear altogether, just one of the many mysteries woven into this rich and tantalizingly open-ended psychological study.
(...)
But Stewart is the one who actually embodies what Binoche’s character most fears, countering the older actress’ more studied technique with the same spontaneous, agitated energy that makes her the most compellingly watchable actresses of her generation.

The picture is worth enduring for the performances by K-Stew and J-Bo. They are the only authentic things in a sea of contrivance and bad faith. Major prizes would come as a surprise.

The Film Stage
(...)
Stewart has been a strange property during her time in Hollywood, her talents as an actress mostly untested (or, better put, ignored) in the Twilight franchise, despite showing signs of promise in films like Adventureland and The Runaways. Val is a complex role in which the actress never loses her real-life persona, instead embracing it to develop a dynamic with Binoche’s more classically moved performance. The two begin on a train to Zurich to honor Maria’s great collaborator, a German playwright who wrote the role that made her famous, when they learn the man has died. More than that, a young director hopes to re-stage the play with Maria once more, not in the lusting and forceful youth role, but as the suicidal, weak-willed, older woman. 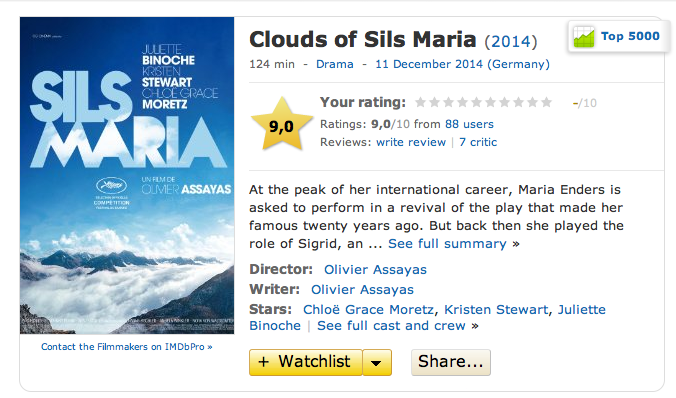 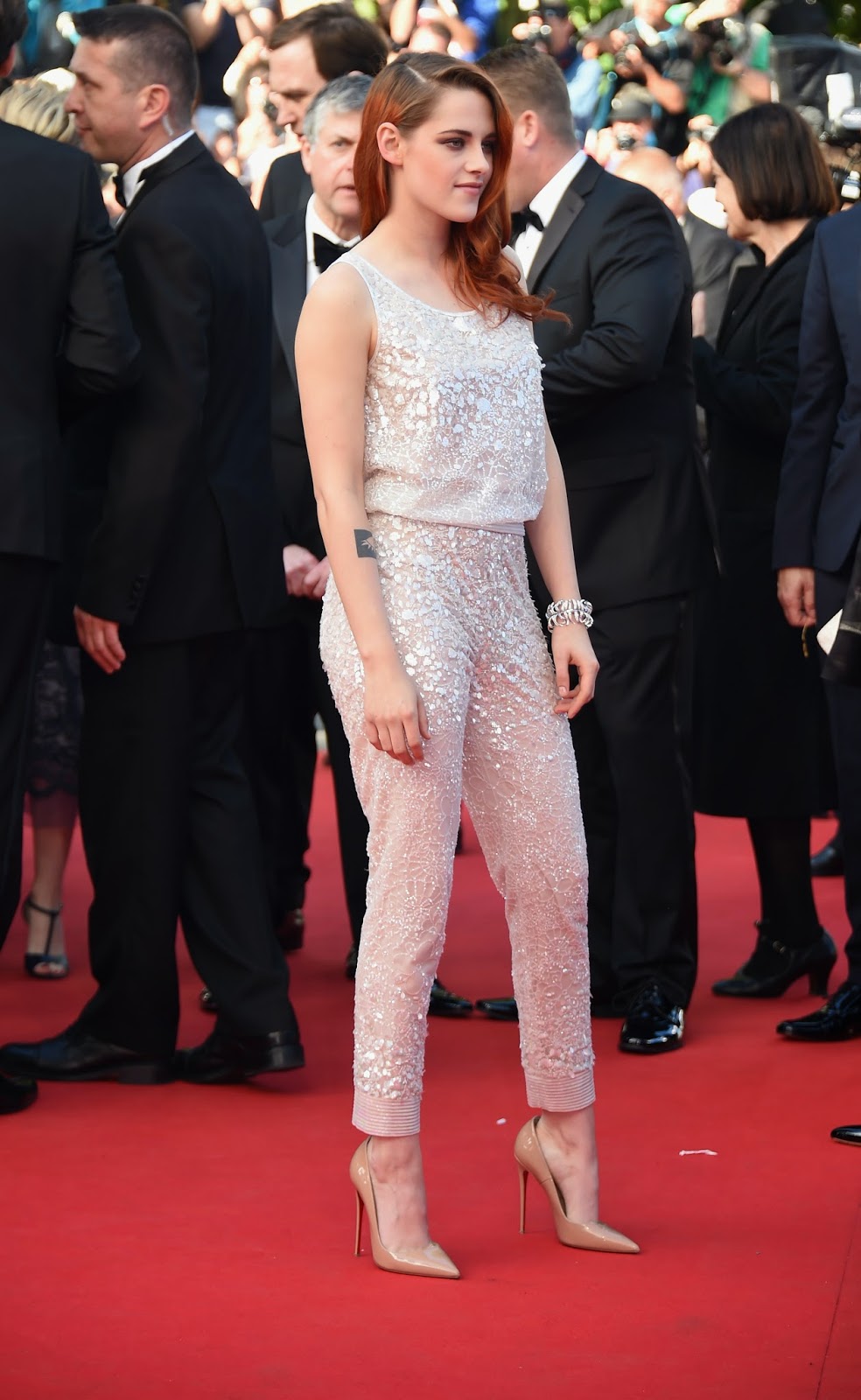 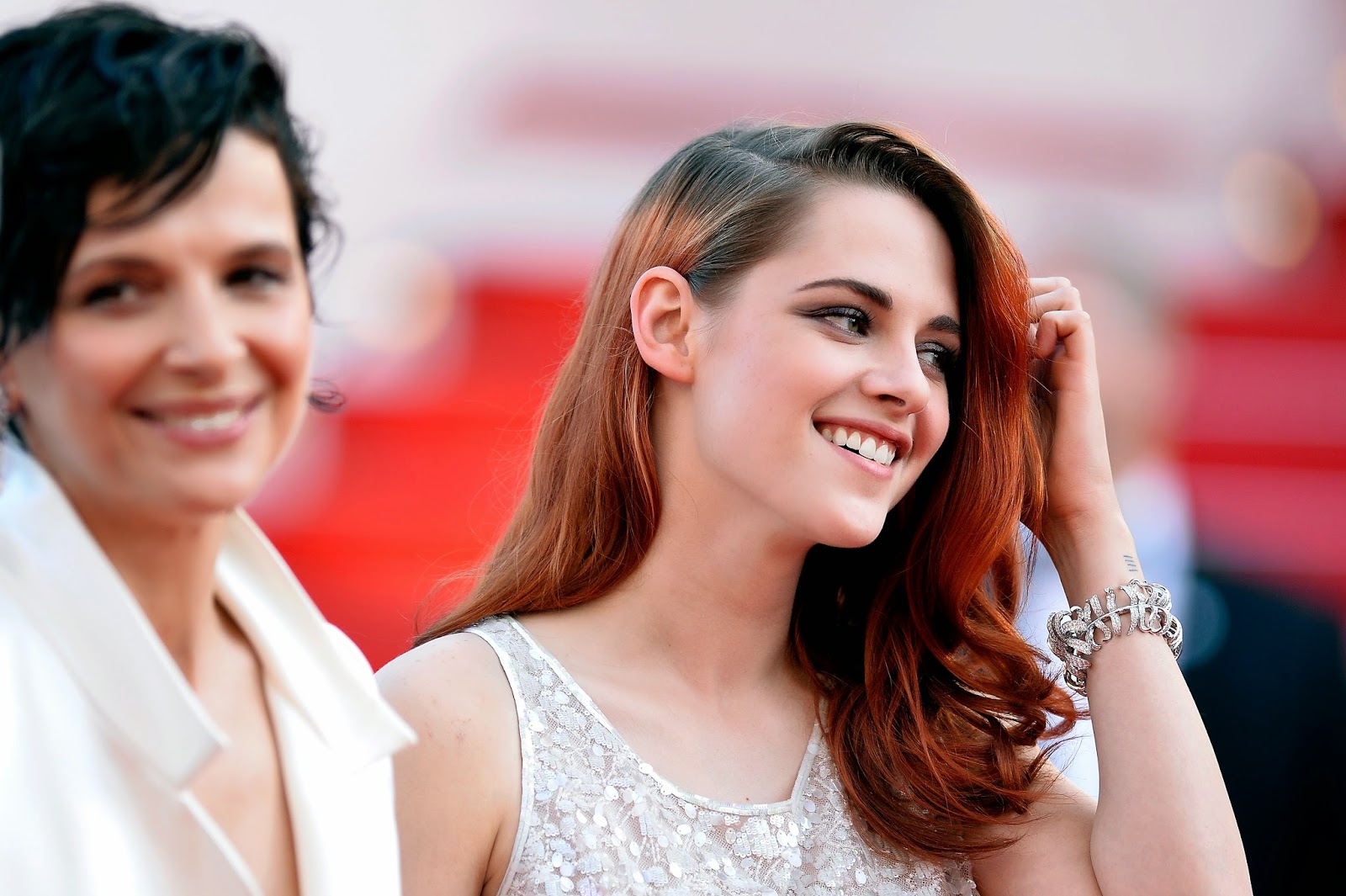 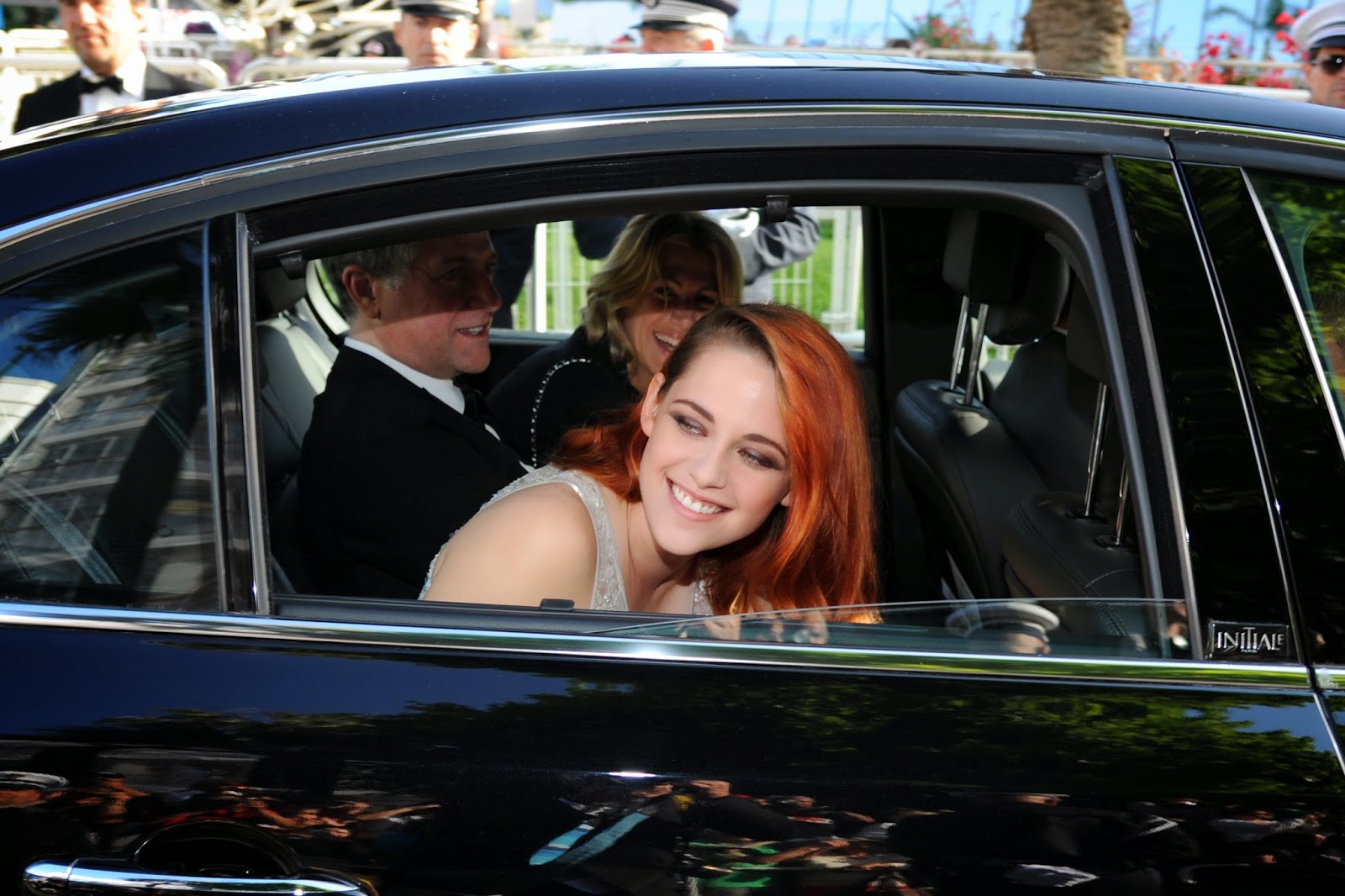 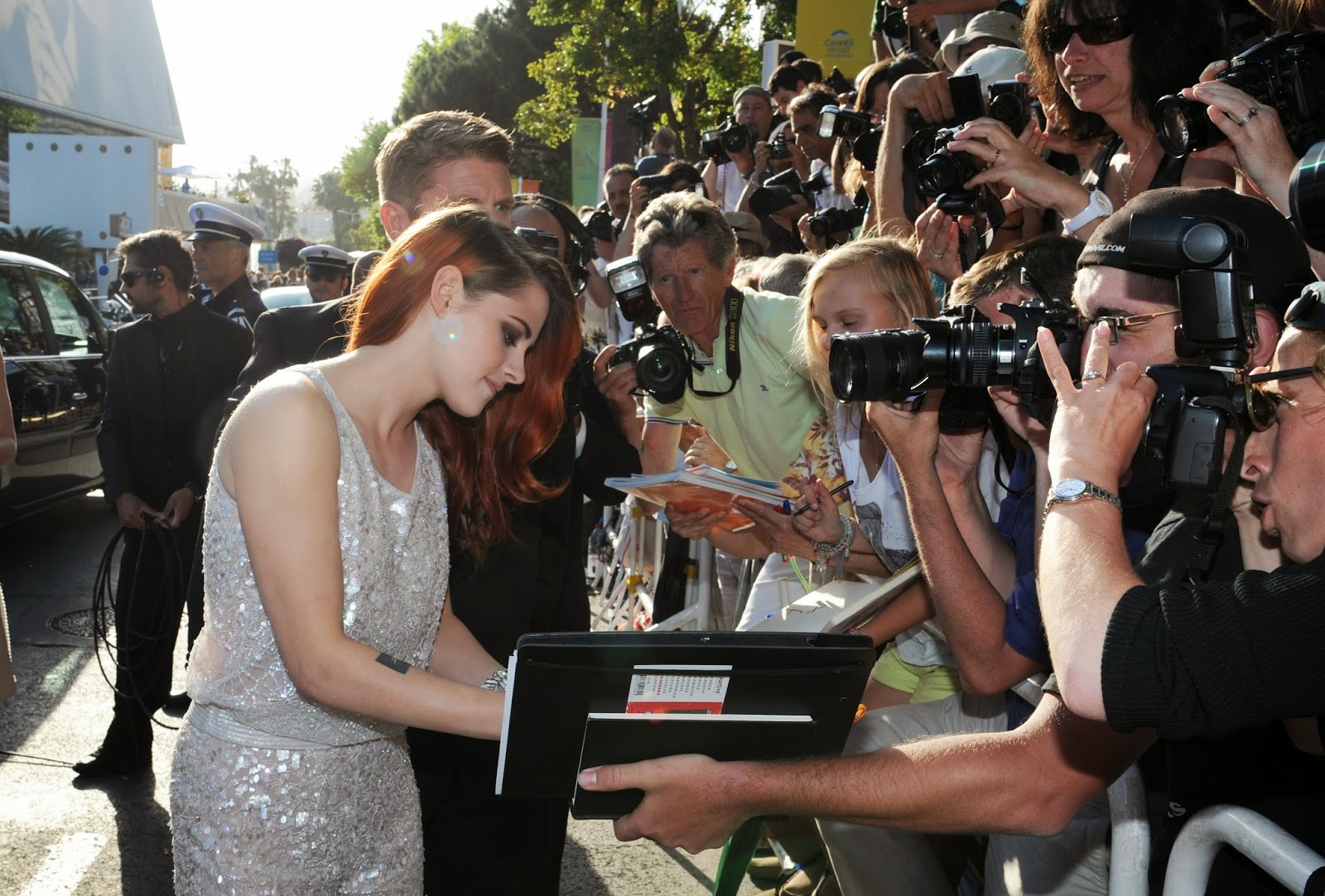 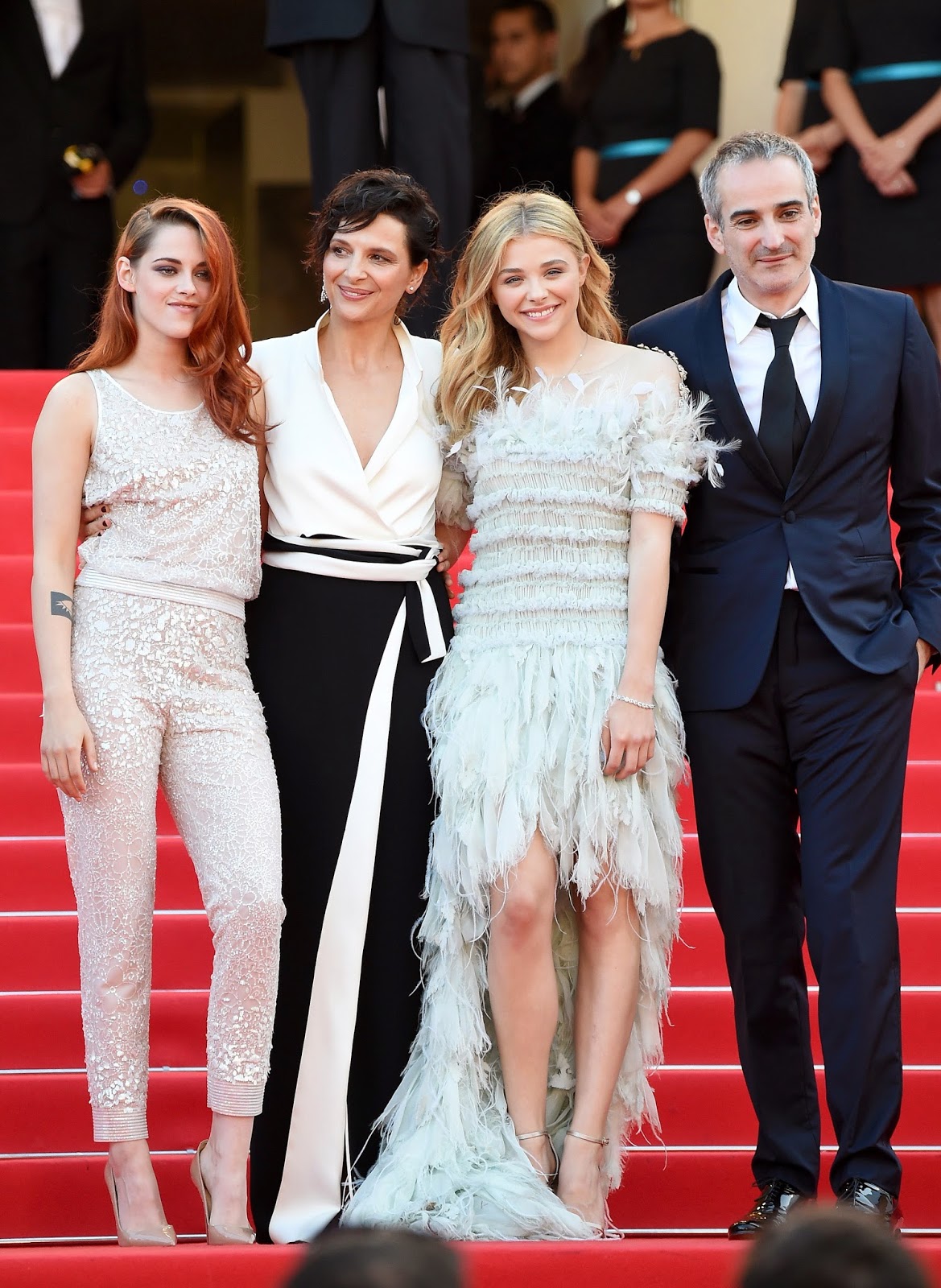 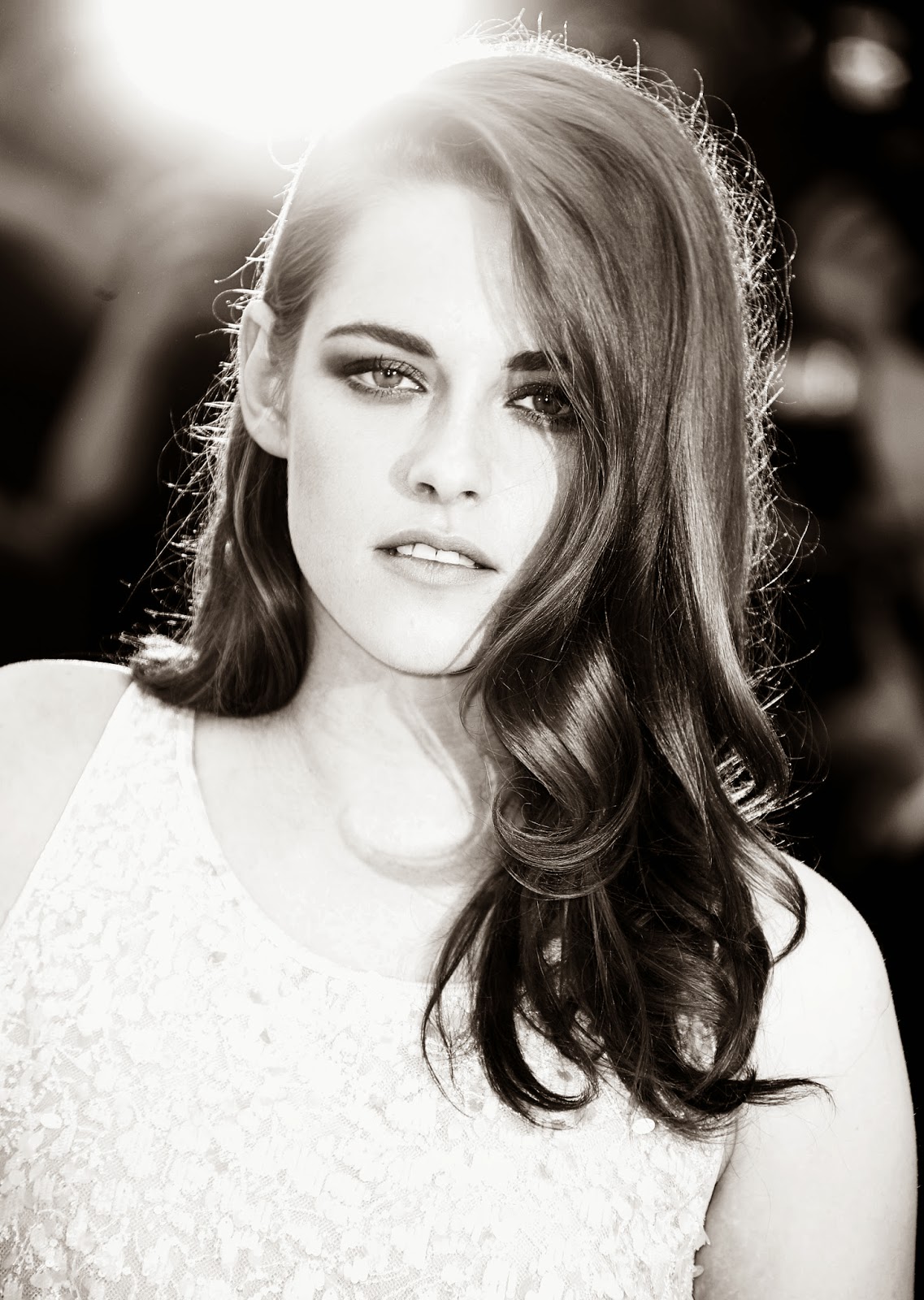 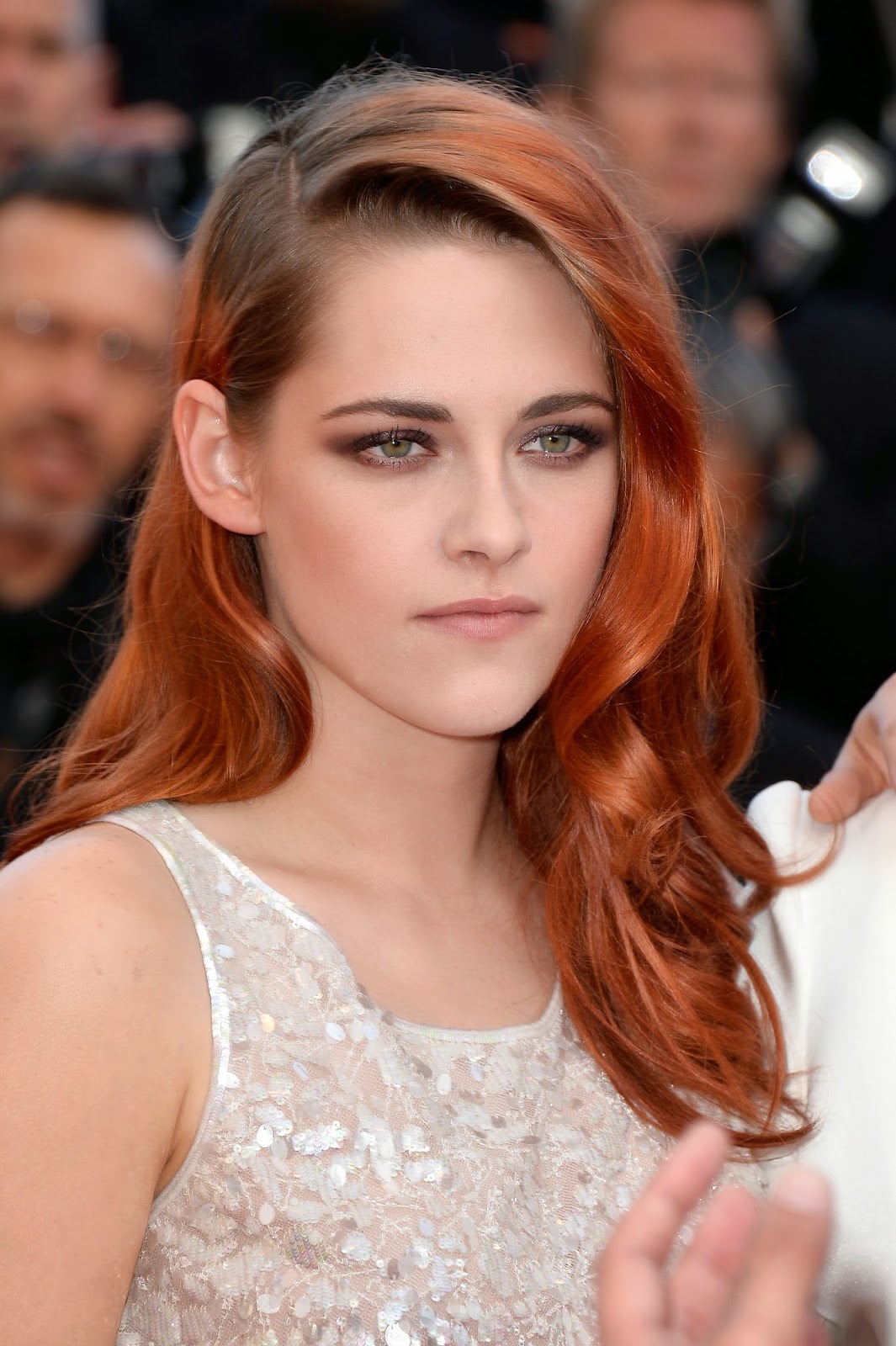 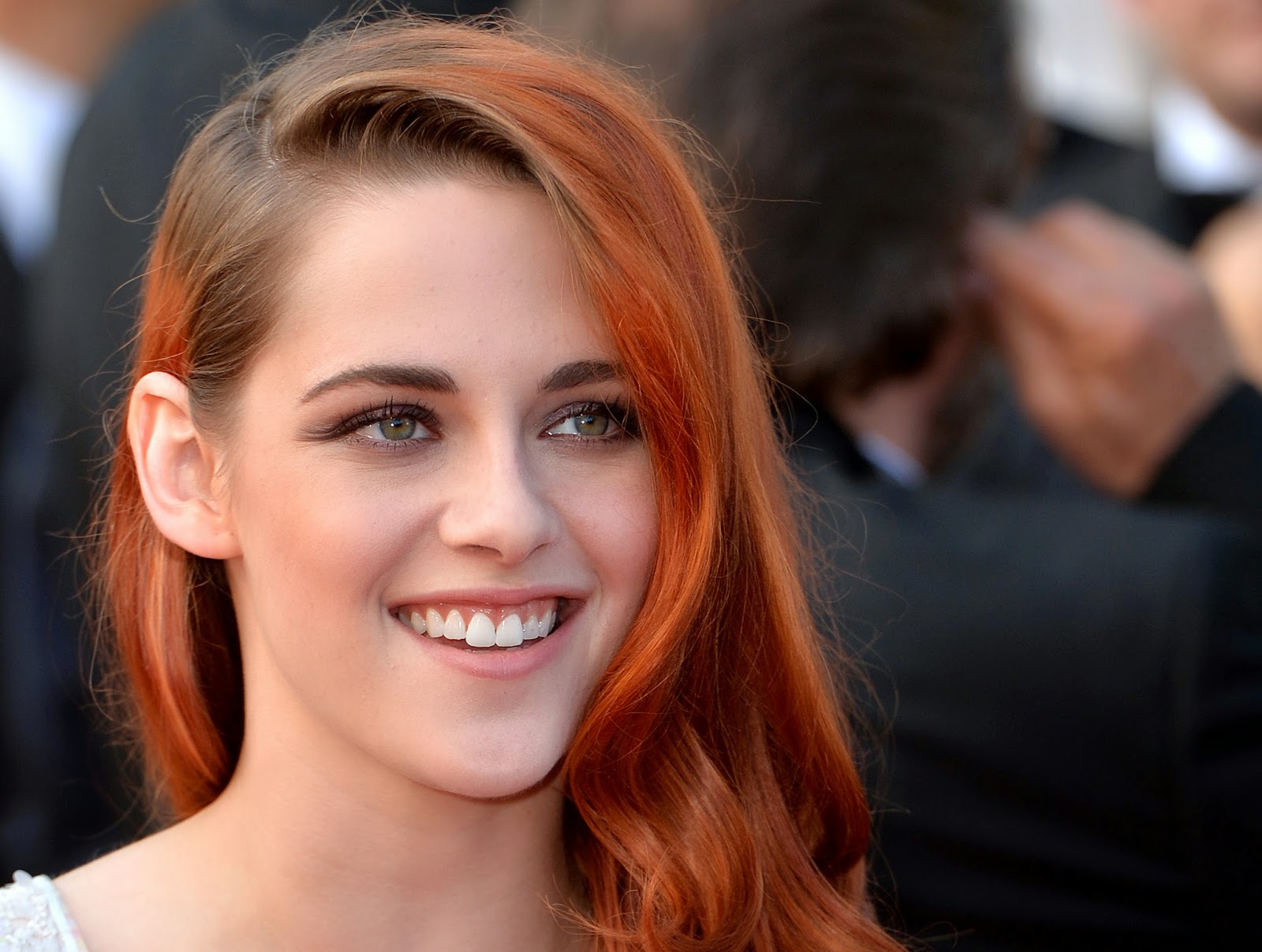 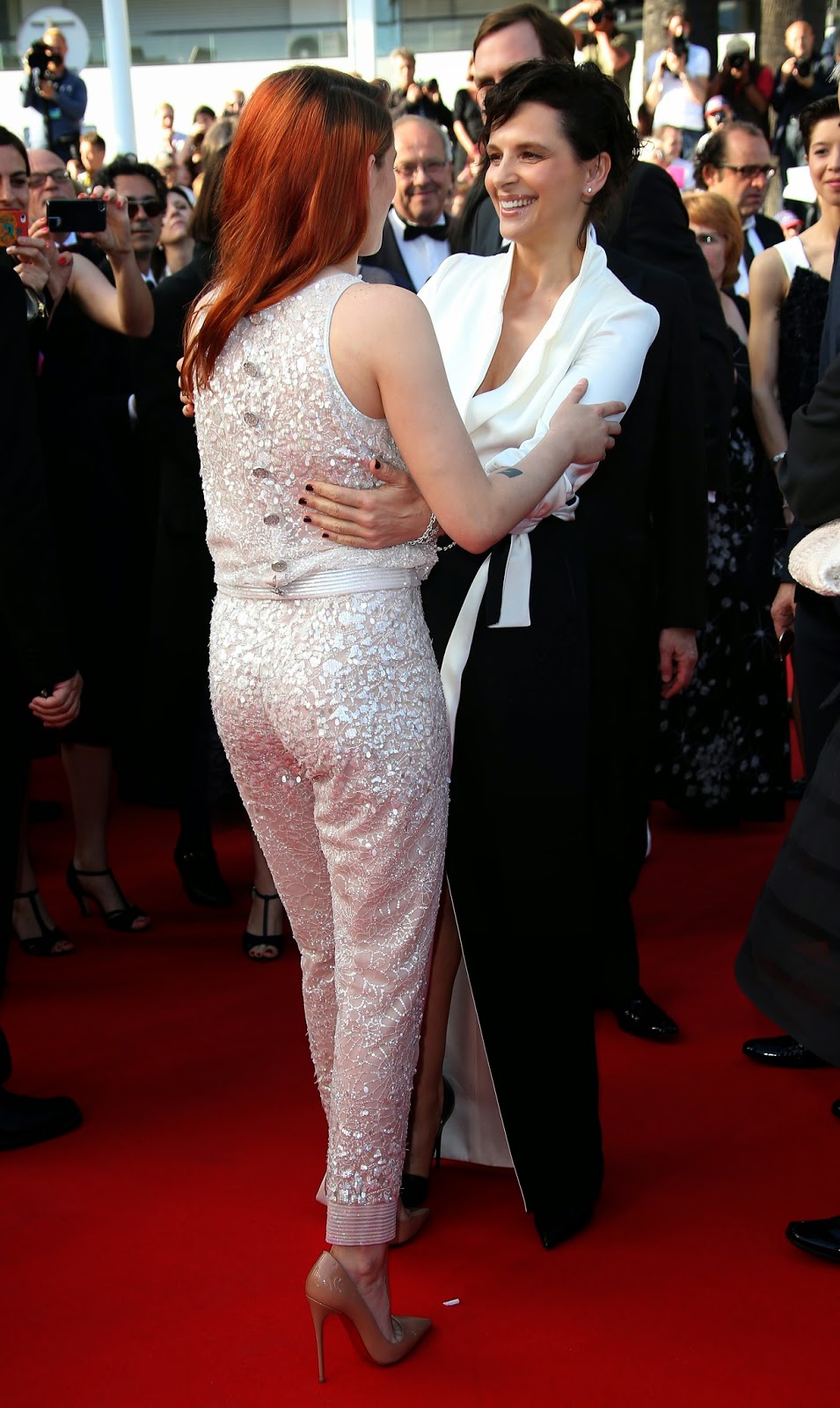