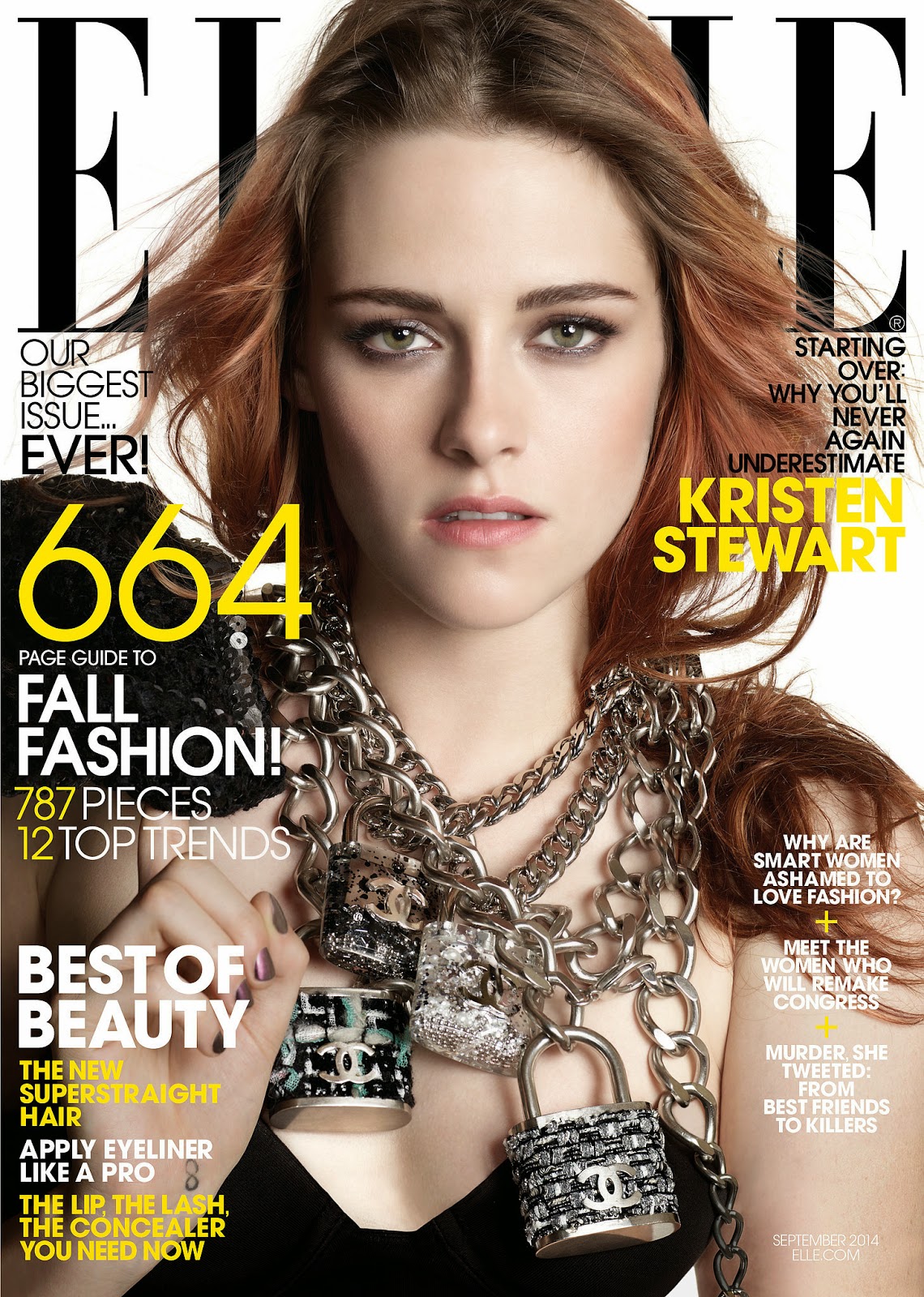 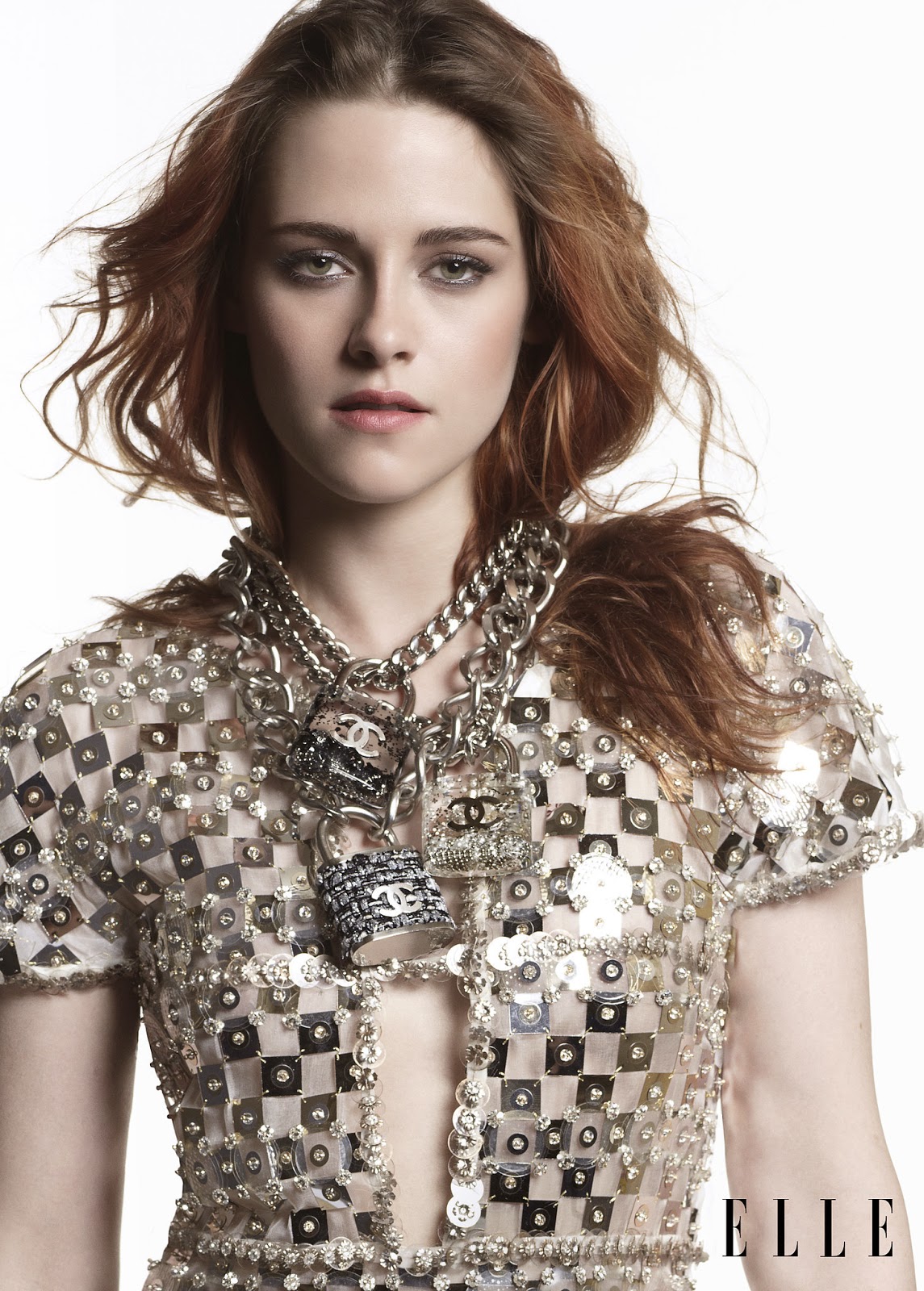 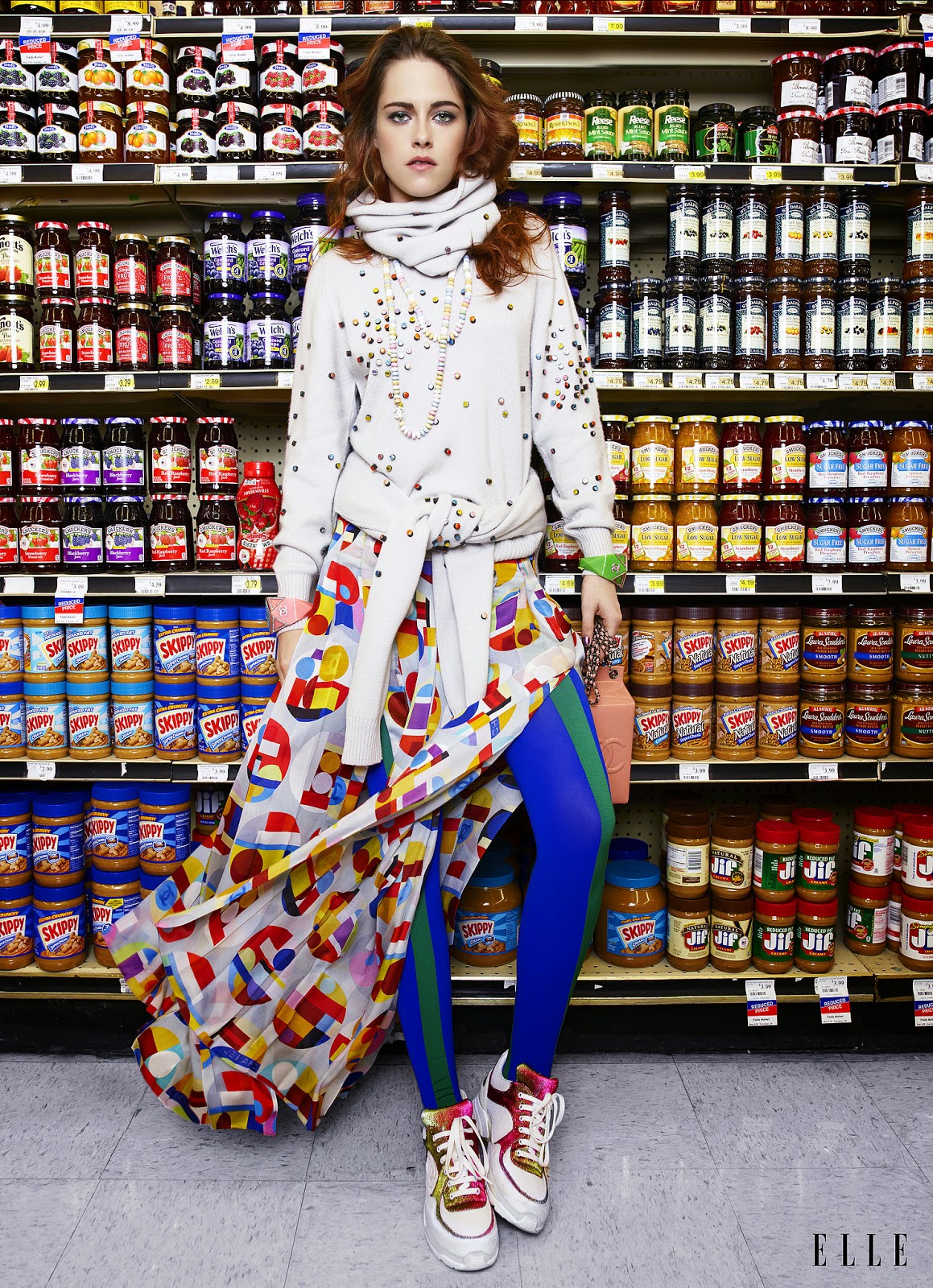 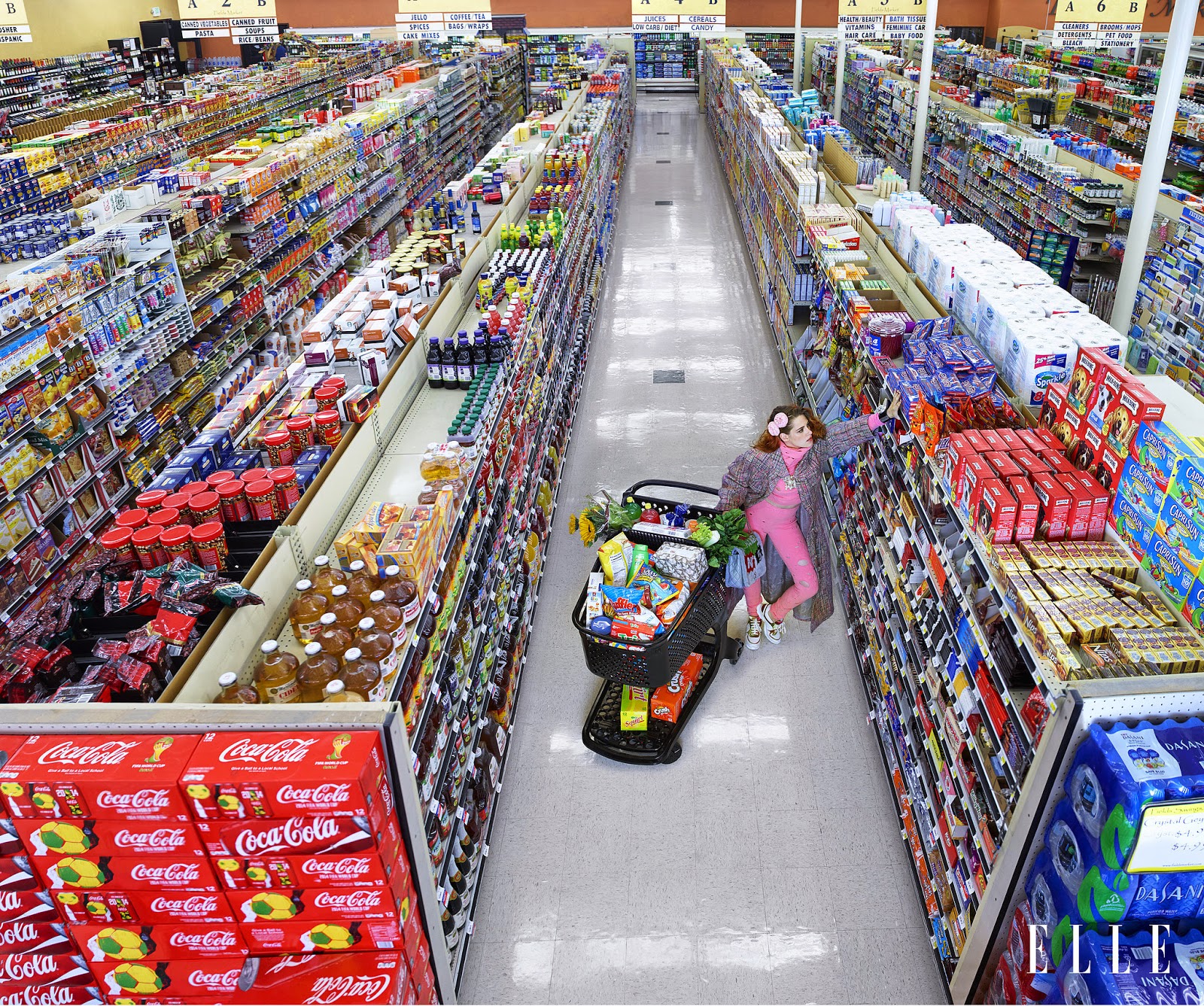 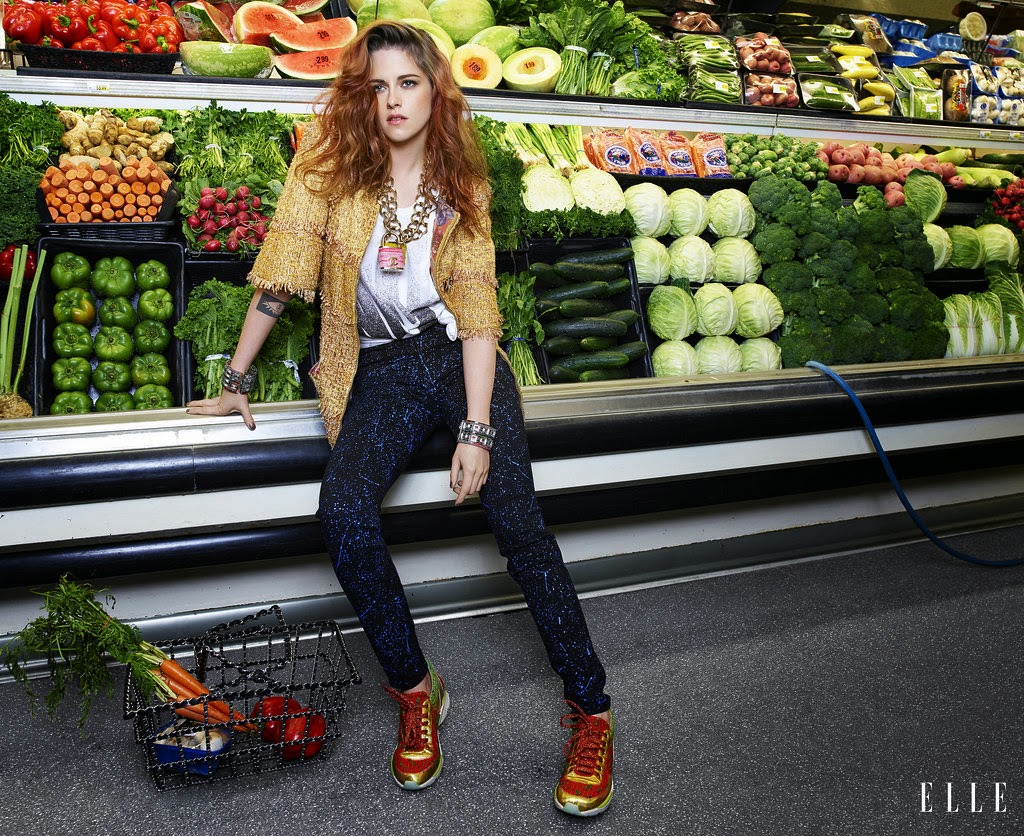 Kristen Stewart. Chanel. It's ELLE's September issue, and it's our BIGGEST one ever: http://t.co/2O1IFuc2GL pic.twitter.com/jkPmhW4tlN
— ELLE Magazine (US) (@ELLEmagazine) 7. August 2014

"If I smiled for a paparazzi photo that’s exactly what people would be desecrating me for" http://t.co/k0qFXIVj8y pic.twitter.com/IN6yZxEfuk
— ELLE Magazine (US) (@ELLEmagazine) 7. August 2014

For the September issue, ELLE took over Fields Market in West Hills, California, turning aisles of organic produce, tuna cans, and soda into an everyday-glam backdrop for Kristen Stewart’s cover shoot. At once the ultimate tough girl and the vulnerable everygirl, Stewart has been bringing emotional, undeniable real characters to the big screen for more than a decade. She has millions of fans and a slew of new projects big and small, but the actress’s most impressive feat to date may be her ability to tune out all the noise and just be herself, no matter what.So what is it like to be, well, Kristen Stewart? In her cover story, Stewart discusses if having a private life is even possible for someone like her, how the sudden fame brought on by the Twilight phenomenon shaped her and her public image, and what actually makes her want to “fucking hang out and chat all day” with strangers.Here, a sneak peek at the story:Stewart on letting her career evolve naturally:“Never at any point have I sat down and plotted how I should proceed from here on. As soon as you start thinking about your career as a trajectory—like, as if you’re going to miss out on some wave or momentum—then you’re never doing anything for yourself anyway. Then you’re truly, actually, specifically working for the public. You’re turning yourself into a bag of chips.”Stewart on not being able to please all the people, all the time:“Now I feel like if I smiled for a paparazzi photo—not that I ever would—that’s exactly what people would be desecrating me for. They’d be like, ‘now you’re going to give it up, now you’re a sellout.’ like, okay. What do you want? What would you like?”“The day the movie came out there was a picture of me—in the New York Post, I think. I was sitting on my front porch, smoking a pipe with my ex-boyfriend and dog. And I was like, Oh shit, well, I have to be aware of that.”The full interview and fashion feature can only be found exclusively in ELLE’s September issue, available digitally and on newsstands in select cities starting August 12, and nationwide on August 19.
source